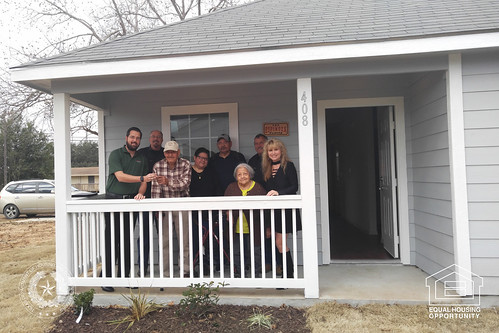 *Note – Home repair activities featured in the article below were made possible through a funding award from the TDHCA HOME Homeowner Rehabilitation Program to the City of Smithville.

Prudencio and Adela Espinoza lived in their home on Walker Street in Smithville more than 50 years. It was a beautiful, two-story house with a large rounded porch beset by columns, where they raised their children and grandchildren.

But through the years, the roof started to leak water in several places, and the sheetrock caved in. Adela Espinoza got sick and ended up in a wheelchair. Poor insulation kept the inside cold in the winter, and it was hard to navigate the narrow hallways. “I told my mom, it’s just going to get harder and harder,” daughter Maria Rodriguez said. “You aren’t going to be able to walk like you used to on your own.”

Rodriguez said she watched in tears, holding fast to its last fragments.

However, since then, a new and better house has risen in its place, paid for through a state grant program called Texas HOME, which uses Texas Department of Housing and Community Affairs funds to repair or rebuild deteriorating houses.

Since 2003, the program has paid for 19 new homes in Smithville, including the one for the Espinozas, who received their keys last week.

“It is a true blessing,” Rodriguez said. “They are both so happy and grateful for this new house.”

The modern three-bedroom, two-bath house is energy efficient and wheelchair-accessible, with a small porch. The state-financed construction cost came in at $85,000, with the city on the hook for a 3-percent match, or $2,550, which it paid through in-kind donations by waiving building permit fees and hauling dirt to the site.

“We would like to continue doing this,” Smithville City Manager Robert Tamble said. “These are homes people are living in that are falling down around their heads.”

To qualify for the program, applicants must: own a home inside the city limits, have clear title to the property, make on-time property tax payments and earn less than 60 percent of the median income for Bastrop County, which for a family of four is $46,080.

Though the Espinozas met all these requirements, the journey to their new home was not without its roadblocks.

The Espinozas first applied to receive the state grant almost two years ago and were stalled when the Texas Historical Commission refused to sign off on the project, saying their old house was considered historic due to its age and location in a “predominately African-American neighborhood,” and therefore could not be torn down.

But Tamble went to bat for the family, fighting the historic designation and eventually earning approval for the project.

“Robert will do anything to help the people in his community,” Karen Rego, a representative of Langford Community Management Services, who oversees the program for Smithville, said. “He will work to the ends of the earth to get someone what they deserve. And he did. He was instrumental in getting the Texas Historical Commission to reverse their decision.”

“I am never going to be able to have so much gratitude,” Rodriguez said. “I am going to always carry that.”

On the same day city officials presented the Espinozas with their keys, they also gave a set to Adrienne Duncan, who received a second HOME investment partnership award to construct a new house in place of the old trailer she had lived in on Jones Street for 33 years. After a long waiting period, Duncan said she was grateful to finally move in over the weekend.

“Right now, it feels pretty good,” she said. “It’s the beginning of a new year in a new home, and I am ready to give it another 33 years or more in my hometown of Smithville.”

* The U.S. Department of Housing and Urban Development (“HUD”) provides HOME funds to TDHCA through an annual formula grant. The Department awards these funds to eligible applicants, such as the City of Smithville, which expends the funds at the local level to expand the supply of decent, affordable housing.